The Kia Soul is a compact car designed for Generation Y and “the young at heart”.   While in Australia its sales languish near the bottom of the small car category (ironically attracting older buyers), in USA it has been one the automotive successes of the past three years.  A good part of this success has been attributed to an immensely popular ad campaign.

The car itself is no slouch having received numerous accolades including in the UK Fast Car magazine’s  ‘Best New Model for 2009’ and in the USA, Ward’s AutoWorld ‘Grooviest Interior’ award.  And it’s clearly been designed for its youth target with standard features that include Bluetooth, a USB port, integrated iPod controls and an abundance of interior cubbies, plus a price tag that starts from just US$14,000.  (There are also optional speakers that flash a light in time with the music being played).

But what has had America’s Gen Y talking and sharing is its advertising.

The 2009 launch commercial introduced the slogan ‘A new way to roll’ and a cast of car driving, ‘cool’ hamsters bobbing their heads in unison to the beat of a music track.  Everyone else – the ‘unhip’ people not driving a Soul – are symbolised by hamsters running on exercise wheels.

The spot went on to win ‘Ad of the Year’ at the Nielsen Automotive Advertising Awards and an American Marketing Association Silver EFFIE, with the Soul being one of the main contributors to Kia’s sales jumping 36% in 2009 compared to the industry 10% average.

Maybe not surprisingly the spot became a Youtube favourite, with around 2.5 million views across the various versions posted.  After all it had two common ingredients for viral success – popular music and cute animals (even if they were created by a combination of motion-capture and costumes).

But this has been way out done by the campaign’s 2011 TVC that has to date garnered over 17.6 million views and has helped the Soul to become – according to Advertising Age – one of America’s hottest products of the year.

To achieve its viral fame the spot unashamedly and imaginatively combined some of Youtube’s most popular genres.  While the communications industry tends to be self-depreciating of the use of ‘proven’ viral content, the evidence is certain types of videos pull the numbers.  Adorable animals, funny or talented children, celebrities, daring or zany stunts, real life slip ups  (think Funniest Home Videos), music videos, video game trailers and movie trailers all make the list. 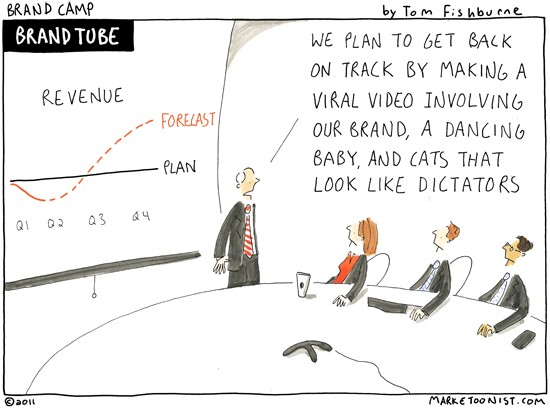 Kia already had the animals and knew the value of the right music.  To take this to the next level they annexed and combined elements of popular culture from various genres.  First the music was ‘upgraded’ to LMFAO’s Party Rock Anthem , a global #1 hit and winner of Favourite Song at  Nickelodean’s 2012 Kids’ Choice Awards.  Second the hamsters were further anthromorphosised into characters resembling teenage hip-hoppers with a talent for shuffling.  Then an apocalyptic robot war scenario reminiscent of various sci-fi video games and action movies was overlayed.  The result is a pyrotechnic mash up of Alvin and the Chipmunks, MTV, Halo and Terminator Salvation.

This was a TVC deliberately conceptualised to go viral.  While many advertisers try for this few succeed.  So the multiple layering of popular online genres is a creative strategy that other brands may want to explore.

After all the most viewed Australian commercial on Youtube in 2011 was Strongbow’s Summer Blossom spot, with its online popularity being largely attributable to its music track (“Young Blood” by the Naked and Famous).  This has gained around 52,000 views against Kia Soul’s 17.6 million.  To remove the impact of non-US views the view count for the Soul TVC can be discounted by 50% to an estimated 8.8 million US-only views.  Given the US population is some 14 times larger than Australia’s, this number can be indexed back to 628,000 to make it comparable to the Strongbow TVC’s views.  As it a result it can be argued that the Soul spot has been some 12 times more effective on a like for like basis than the Strongbow ad as a viral piece of communication.