According to the Australian Institute of Company Directors, companies, government and society as a whole are suffering from “excessive short-termism”.

One driver of this is visibility.  As the AICD notes, “In a world where information is ubiquitous and everyone is digitally connected, the short-term impact of decisions can become widely known within a matter of hours.  Arguably, this is contributing to a growing trend towards short-term perspectives and objectives”.

Marketing has fallen in line with this.  Business expectations of instant ROI coupled with the flexibility of digital platforms, and the immediate metrics they offer, means that marketers are increasingly focused on the ‘short-game’.

Yet even as businesses are employing the latest marketing tech and techniques, they’re finding that they’re just not winning where it really matters, with many seeing flat or declining: market share, year on year same store sales, market penetration, basket size and so on.  While other internal and external factors often contribute to these situations, typically they are rooted in investment decision making based on short-term earnings expectations undermining long-term value creation.

To get a different appreciation of this dilemma – and for those that find analogies useful – following is an outline of a parallel situation in soccer’s 21st century infatuation with playing the short game and how the 2018 World Cup challenged it.

I am by no means a soccer aficionado, but I appreciate that traditionally there are different styles of play across countries and regions.  For instance, Brazil’s high paced, free flowing approach versus Italy’s focus on defensive pressure with counter-attacking runs.

This aside, over the past decade or so, many countries and clubs have integrated aspects of the Spanish style of play into their games.  Known as Tiki-taka, this style is “characterised by short passing and movement, working the ball through various channels, and maintaining possession”.

The reason for this has been the Champions League success that the Barcelona club enjoyed from the mid-2000s onwards using this style, and the subsequent success of the Spanish national team with it in winning the 2008 and 2012 European Championships and the 2010 World Cup.

As a consequence, a lot more soccer is now focused on keeping possession of the ball through continual short passing.  This despite the fact the Spanish developed the approach to specifically suit its roster of technically talented, physically small players. And that as a result of this focus, possession in itself has simply become the key objective for many teams.

My father – a former sports journalist and youth soccer coach – often laments this state of affairs.  His pet hate is the back pass on the basis that a team can’t score a goal (the actual objective of the game) if it doesn’t keep moving the ball forward.

Yet the appeal of the passing game is obvious.  It’s immediately visible and measurable in the number of passes made, percentage of accurate passes, minutes of possession, etc. This provides the belief that your team is winning the game, the implicit promise all of this will convert into goals (even if this isn’t yet reflected in the actual score) and an expectation of ultimate team success.

But amongst many other things the 2018 World Cup will be remembered for is disrupting the philosophy of the ‘short’ game.  Two of its strongest proponents – Germany and Spain, the two most recent World Cup winners – made early exits from the tournament.  Many other higher possession teams also found the going difficult.  For instance, below are the half-time statistics for the Round of 16 clash between Portugal and Uruguay. 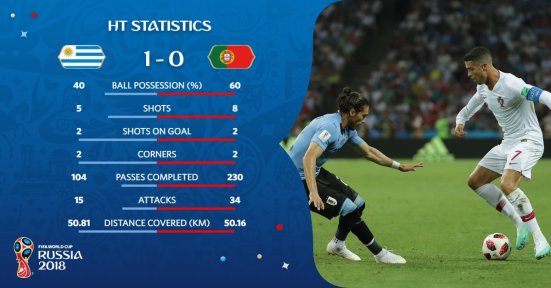 Based on all the numbers except one, Portugal were dominating the game.  The only problem was that the number that mattered the most – goals scored – was against them.  Despite Portugal going on to complete the match with 61% of possession and 490 completed passes to Uruguay’s 186, it lost 2-1.

In the final, even when the eventual champion France was leading 4-1 against Croatia it had only had 34% of possession.  It won the final, like it won many of its other games, by playing the ‘long’ game best suited to its extraordinarily talented playing group.  An approach that almost counter-intuitively constrained its attacking talent until the right opportunity opened up to unleash an incisive through-ball or a blistering run.

So, what has all this got to do with marketing again?

Hopefully the majority of marketers reading this will readily appreciate the parallels with where marketing has been over the past few years.  For everyone else, here’s a very top-line summary.

The attraction to these types of metrics, to employing multiple small-scale tactics, and to testing and learning on the run, characterises much of modern marketing.  The ‘short’ game has become standard practice.  It has been adopted across the board with often little interrogation of its inherent suitability for categories, specific brands or competitive situations.  The marketing equivalence of the question “Are we a team of technically talented, small players” rarely gets asked.  And such big picture objectives as protecting or growing market share, building loyalty and brand equity, are lost sight of.

This despite a breadth of evidence that marketing adds the most business value when it takes a medium to long-term view of its activities.  For instance, based on “the business effects of 1,000 advertising campaigns from over 30 years”, the UK IPA’s seminal The Long and the Short of It report makes such critical points as:

Economist Charles Goodhart is known for an adage named Goodhart’s Law.  It goes something like “When a measure becomes an objective, it stops becoming a good measure”.

Something for marketers and their companies to consider in an age driven by short-term metrics and tactics and the growing neglect of the ‘long’ game.

:Thinkshots | Thinkshot posts are observations and ideas relating to current issues and trends impacting the future of brands, marketing and marketing communications.